Bob Beardman was born in Perth on 25 November 1931, the son and grandson of target rifle shooters and hunters.

A keen shooter from the age of 7, Bob started shooting with a .22 rifle bagging rabbits for the pot. He attended Christchurch Grammar School where he was a member of the school cadet unit.

His shooting prowess stood him in good stead and he was a member of the school’s Commonwealth Cup team for three years including one Cup victory in 1947 (tied for top individual score).  He also took home the Norrie Cup as champion shot of the school for three consecutive years.  Whilst at school he joined the Mines Rifle club at age 15, a year or two later he was on scratch handicap for the club.

After leaving school Bob worked in the building industry as a carpenter. He joined the State Government and retired as the Chief Inspector of the Construction Safety Branch in 1989.

In March 1950 he enlisted in the Citizens Military Forces (CMF) with a number of his mates who all joined the 5th Petroleum Platoon Royal Australian Army Service Corps at Karrakatta, which later became the 16th Petroleum Platoon, RAASC.  The petroleum platoon was a small detachment responsible for maintaining the fuel depot during annual camps at Northam and, in the field, providing refuelling services for divisional transport, using jerry cans, 44 gallon drums and hand pumps.

Bob found promotion quickly, achieving the rank of Sergeant within 4 years of enlisting.  His civilian target rifle experience again came to the fore with him qualifying as a 1stclass shot with both rifle and LMG from 1951-3.

Reviewing Bob’s scores following an annual unit range practice an ARA cadre staff captain suggested to Bob that he should contest the Western Command elimination contest for the Queen’s Medal competition. It was good advice.  Bob contested the 1953 eliminations and won, becoming the Western Command representative in the 1953 Queen’s Medal final. Early November 1953 saw Bob winging his way across Australia in a Lockheed Super Constellation to attend the Queen’s Medal final being held at the Merrett Range at Williamstown, Victoria on 12 November 1953. 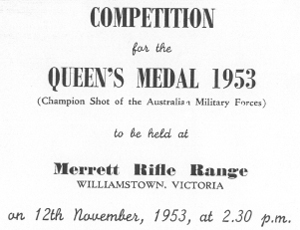 The Williamstown range was no stranger to the King’s and Queen’s medal competitions, having previously hosted 11 of the 22 finals. The 1953 competition was Bob’s first Queen’s Medal final and was to be a major learning experience for him and a precurser to his later success.

Bob led the field of ten competitors after the first two stages (600 yards Application, and fire with movement) but was overtaken during the rapid fire and snap shooting stages.

The competition was won by another first time finalist Sergeant Gordon Loveband of Central Command with a score of 157/200.  Second was WO1 Prismall from Tasmania on 145.  Bob finished a creditable third scoring 144.  There are not many soldiers who had a placing in a Queen’s Medal final under their belt before their 22nd birthday and indeed, Major Magennis who placed fourth and who was the King's Medallist in 1951, and the first Queens Medallist in 1952, said to Bob after the conclusion of the 1953 final “You’ll win this one day”.

Bob competed in the 1954 competition without success and it is worth noting that the Western Command representative on that occasion was Sergeant P. F. Jeffery, Intelligence Corps, who won the 1954 Queen’s Medal with a record score of 180/200.

1955 saw Bob win the Western Command elimination contest again, which meant another interstate trip for Bob, this time to the Anzac Rifle Range at Liverpool, in Sydney.

Bob was the sole CMF competitor in the final, the remaining shooters all being ARA.

Repeating his 1953 form Bob posted the leading score of 48/50 in the first 600 yard application practice and with a score of 43, shared equal 1st place in the fire with movement serial.  A second place score of 35 in the rapid was followed by the best score of 34 points in the snap shooting serial.  A total lack of flags hindered wind reading for all competitors.   Bob's final aggregate was 160/200 which was sufficient to secure the Queen's Medal six points ahead of his nearest rival Major E. A. Green from Eastern Command.  WO2 R. D. Archer from Southern Command finished third with a score of 152.

At the conclusion of the shoot the Competition Director Colonel Desmond. J. Duffy MC announced Sergeant Beardman as the winner of the competition and the Queen’s Medal was presented by The Right Honourable Sir Eric Harrison KCMG KCVO PC, the Minister for the Army and Navy (Federal member for Wentworth from 1931-1956 and subsequently High Commissioner in the United Kingdom for Australia) in the presence of the Deputy Chief of the General Staff and other distinguished Army officers. 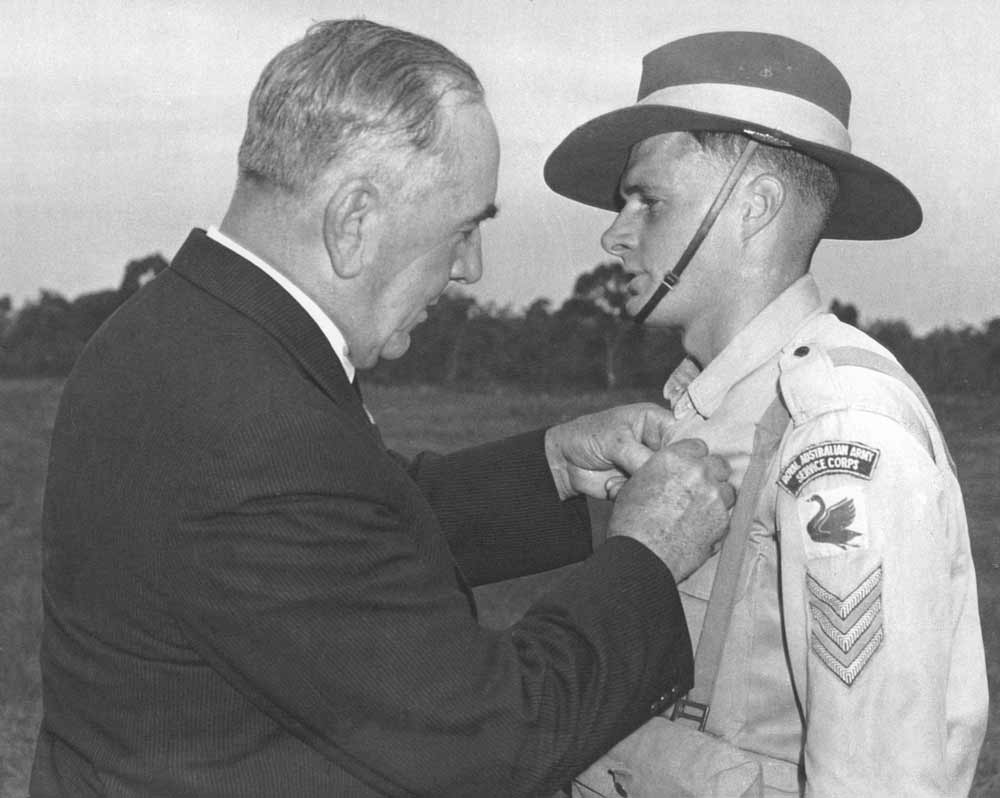 By all accounts, the 1955 final conducted under the command of Colonel Duffy was a very well run competition.  An hour was allocated for the competition in the official program, and the final was completed with 3 minutes to spare. Bob’s win was a significant achievement as the other nine finalists included no less than three previous multiple King’s medal winners, one future Queen’s Medal winner and four other shooters who were to each compete in multiple finals. It also came with the added pressure of knowing that his marker had wagered 20 quid on him to win, quite a sum at that time.

The win was also a marvellous birthday present for Bob who turned 24 the day after the competition.  His trip home to Perth was marked by a humourous incident when Bob, laden with rifles, bolts and other shooting equipment, arrived at the check in counter at Sydney Airport expecting difficulties, only to be told by the check in clerk who had obviously read the sports section of that day’s paper “forget the rifles sarge, show us the medal!”.

Bob continued to shoot, both with the Army and with his civilian club, after his win in 1955.  He did not compete in the 1956 eliminations as he was in Melbourne on holidays prior to the Olympics.  He missed qualifying for the 1957 final in Tasmania by 1 point but was present, with another West Australian recipient, Major Bill Hackfath DCM, to see the Queen’s Medal final conducted at the Swanbourne range in Perth in 1973.

Commissioned from the ranks, Bob held various appointments as a transport officer in the RAASC and RACT including with task force HQ, until he retired from the CMF in 1975 with the rank of Temporary Major.  His final posting was as Officer Commanding 10 Transport Company RACT (Divisional Transport).  His commissioned service earned him the Efficiency Decoration for his long and dedicated service.

Bob married Enid Ann Kenworthy in 1958 and they had two daughters Julie and Susan. He still lives close to the Swanbourne range, but no longer shoots, preferring a round of golf instead. 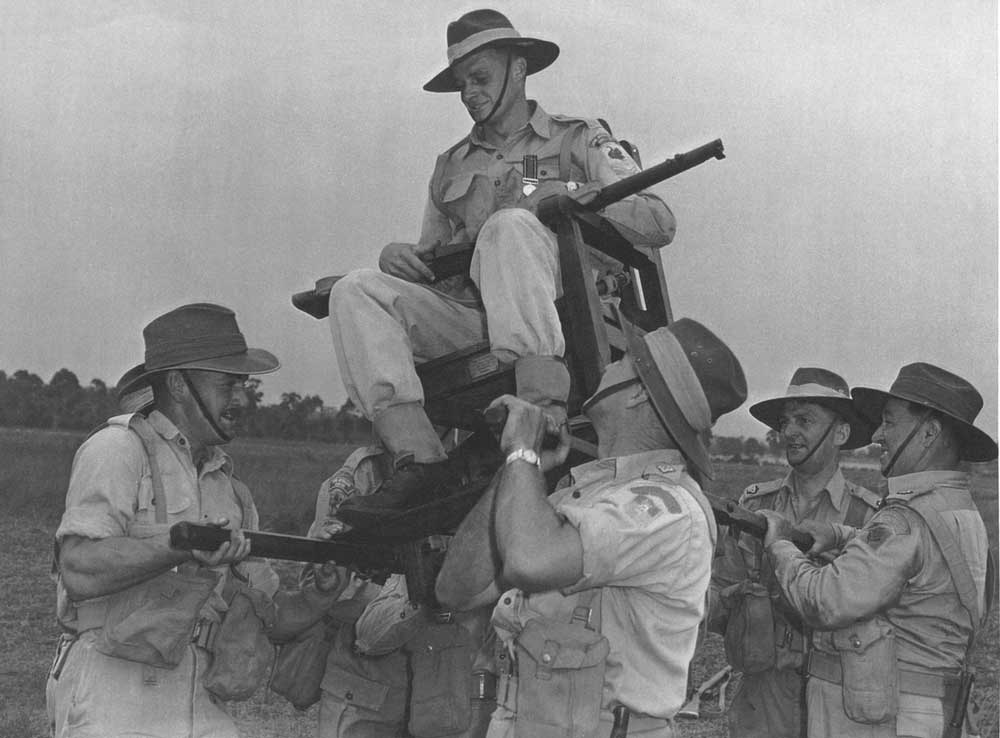