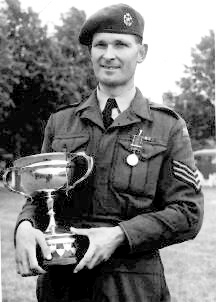 Charles Henry Greenlee was born on 27th November 1918 in Clontarf, Co Dublin, Eire. He came to England and enlisted into the RAF on 13th September 1939 in the ground trade of armourer. He served in this capacity throughout his entire career eventually leaving the RAF, reluctantly, on 27 November 1968 (his 50th Birthday) with the rank of Chief Technician, having served for just over 29 years. His World War 2 service was recognised by the award of the Defence Medal and the 1939-45 War Medal. He was later awarded the RAF Long Service and Good Conduct Medal on 13th September 1957.

He was a relative late-comer to competition shooting, but an introduction to it at RAF Luqa, Malta in 1949 soon proved his natural ability. He became one of the finest marksmen of his generation in the RAF. Moreover, he became an excellent motivator and encouraged many young servicemen to take up the sport. In addition to his ability as a marksman, he had natural ability to lead as evidenced by his success as a team captain.

Sergeant Greenlee was a member of the RAF Malta rifle, bren gun and pistol teams. He was the only non-Royal Navy/Royal Marine member of Malta's Empire Day Challenge Cup team who took first place in the Colonial Overseas Postal Matches of 1950, beating teams from all parts, e.g. Singapore, Jamaica, Hong Kong. This resulted in him being presented later with the first of his many major medals and trophies by His Excellency the Governor of Malta in the Palace Drawing Room, Valetta.

A posting to RAF Ballykelly, Northern Ireland followed and with it annual participation at the RAF Week at Bisley. His first performance in 1953 saw him coming second in the Longcroft Challenge Cup. However, he bettered this the following year when he won the Queen's Medal by one point against extremely strong competition. The runner up with a score of 344/200 was Sergeant P. W. Lane-Joynt who had won the competition in 1952 (the Queen's Medal first being awarded in 1953), and third was Squadron Leader C. C. Willott OBE, who was to win the Queen's Medal in 1956. Another competitor, Squadron Leader Thomas AFC (later Wing Commander Thomas AFC) who had won the first stage of the competition, remained very much in contention until the final snap-shooting match. Wing Commander Thomas went on to win the Queen's Medal in 1958 and 1959. Sergeant Greenlee was presented with his medal by the Honourable George Ward, MP, Parliamentary Under-Secretary of State for Air, and among those witnessing the presentation were Marshal of the RAF The Lord Tedder and Marshal of the RAF Sir John Slessor. In the following years Sergeant Greenlee came close to repeating his success, being runner-up on one occasion, but never quite achieving it. He captained Station and Command teams for a good number of years winning numerous individual and team trophies. After Ballykelly, he served at Geilenkirchen, West Raynham, Swanton Morley and finally at Watton, Norfolk.

In retirement he lived at "Greenleas", Gressenhall, near Dereham, Norfolk and for many years he attended the annual RAF Week at Bisley, keeping his eye in with membership of a local Norfolk rifle club. Charles Greenlee died in August 2001 approaching his 83rd Birthday. His wife Norah (nee Barnwell) predeceased him. He was survived by his daughters Fiona, Deirdre and Moira. 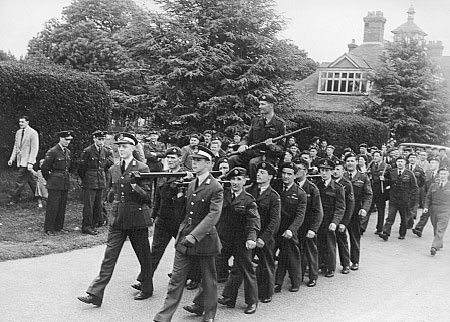